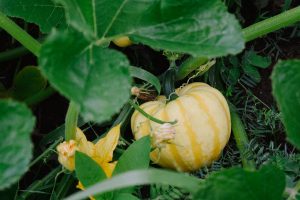 It’s so hard to believe that we’re over halfway done our season.

Things have certainly changed since we first began cultivating the land at the end of April! Around here, time is marked not so much by the days or weeks but by the life cycles of crops, each one completing and giving way to the next: in early June it was the greens, then the peas; in July, the hay. Then came the beans, the garlic, the tomatoes. Here we sit the brink of September: soon enough the nighttime frost will conclude the lives of some crops, and usher in an abundance of others. We have squash and pumpkins out in the front field already bigger than watermelons and still growing. We can’t wait for the fall harvest! 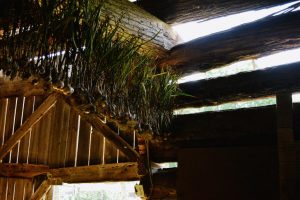 The fall feelings came on strong this past week as I was tasked with picking crabapples from one of the many trees on the property. With all the apples starting to ripen, our kitchen staff has been getting creative as they try to craft the perfect apple butter tart. (Stay tuned for possible basket add-ons…) 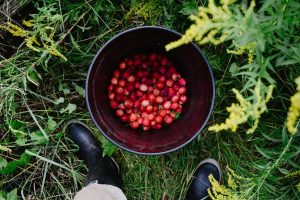 Pictured below is our beautiful back garden, growing in some of the most fertile soils on the property. Most of the plants here are still coming up – this is the garden that’s going to ensure plenty of veggies for your baskets this fall.

I had to climb up on top of the tractor to get this panoramic shot as I wanted to include the fields of mustard and buckwheat growing in back. It may not look like much, but these two cover crops actually serve a vital role in the ecosystem of the farm and its surrounding neighbourhood, and are the main reason why there is such high fertility in this field. Allow me to explain… 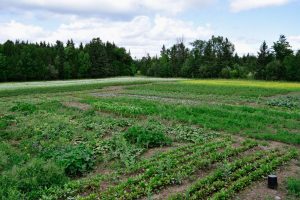 In our region, growing seasons are short, and as many as eight months can go by between consecutive plantings. That’s a long time for a field to sit with its soil exposed, subject to the erosion that rainfall, snowmelt, and wind bring. The purpose of a cover crop is to protect soils during this period. Before the garden was planted this spring, this field spent over twenty years under the protective canopy of cover crop!

Over time, this led to an increase in soil organic matter, improvements in soil structure, stability, and increased moisture and nutrient holding capacity for plant growth. These properties serve to reduce runoff through improved infiltration (movement of water through the soil surface) and percolation (movement of water through the soil profile). A cover crop also provides a natural means of suppressing soil diseases and pests, and mitigates the threat of soil compaction, which can make it difficult for plants to root.

Walking along the field of mustard, another huge benefit became very obvious to me. The entire crop was humming with the sound of bee activity! Looking up closer, I could see just how many bees, among other insects, were utilizing the nutrients in this crop. You probably have already heard that pollinator populations are in steep decline for a variety of human-caused reasons, with major repercussions for biodiversity – which includes agricultural production. The Million Pollinator Garden Movement estimates that pollinators are responsible for 1 out of every 3 bites of food we eat each day.

Pollinator-friendly gardens and landscapes like this one will be crucial for their comeback here and around the world. For ideas on how you can support our local populations right from your home, check out this article! 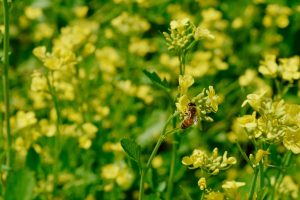 Recipe of the Week: Easy Vegetable Korma with Halloumi Cheese 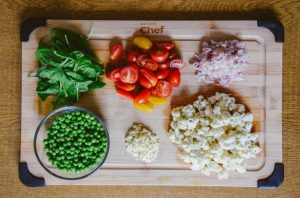 Have you discovered halloumi cheese yet? If you haven’t, put it at the top of your grocery list! And if you have, do it anyway, because you will love this easy and flavourful recipe.

Halloumi (which I forgot to add to the photo above) is a semi-hard, unripened, brined cheese made from a mixture of goat’s and sheep’s milk, and sometimes also cow’s milk. It has a high melting point and so can easily be fried or grilled, which makes it a great meat substitute in all kinds of different recipes. You can find it at most grocery stores – I got mine in a big pack for $7.99 at No Frills.

Korma is a dish originating from India, combining powerful spices with different combination of vegetables and proteins. I simply used the veggies I had on hand, and you can too! Beans, zucchini, cauliflower, kale, carrots, etc – they all work! Tomatoes are just about the only essential.

How you’ll do it:

Heat a drizzle of olive oil in a large pan over a medium-high heat (set the rest of the oil aside). Fry the halloumi for 4-5 mins, until golden on both sides. Set aside.
Add the rest of olive oil and onion, and cook for 4-6 mins, until it starts to soften.
Stir in the garlic & ginger, until soft. Then add korma & tomato paste, coconut milk and broth. Cover until simmering and fragrant.
Uncover and add cherry tomatoes, cauliflower & peas or your choice of veggies. Simmer on medium-low heat for 25-30 minutes or until broth has thickened. (If need be, you can add a bit of cornstarch to thicken.)
Add halloumi and spinach or choice of green. Stir to warm, until greens have wilted.
Serve with basmati rice and warm naan bread. A dollop of plain yogurt adds creaminess and cilantro adds a fresh garnish. Enjoy! 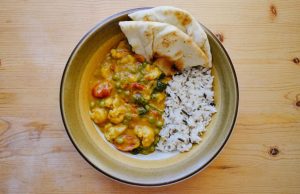